Since October 2017 Marrakesh has one more sight to boast: Architects Karl Fournier and Oliver Marty have created a wonderful building in the 4,000 square meter (43,000 sq ft) “Studio Ko” for the Yves Saint Laurent Museum, only a stone throw from famous Jardin Majorelle, where the late French designer’s ashes were scattered.

Similar to the designer’s neat and world renowned logo, YSL, Studio Ko, in which life and work of Yves Saint Laurent are impressively exhibited, displays simply and clearly the dichotomy of curves and lines. 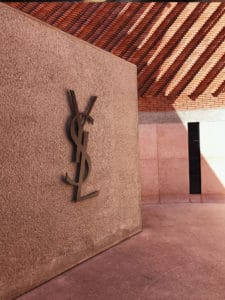 Impression from YSL Museum in Marrakech 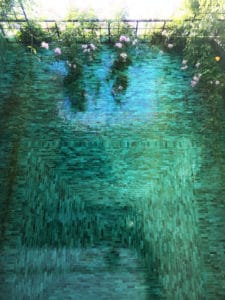 Impression from YSL Museum in Marrakech

Studio Ko’s granite and brick facade shines, depending on time of day, in pink and red, the doorway in blue and yellow, while stripe-like fountains of light catch the sun’s rays. It’s reminiscent of the embroidery on Saint Laurent’s creations that was inspired by the colorful city of Marrakesh and its citizens with their pink, blue, green, and violet kaftans.

Around 100 creations are on display in the permanent exhibition, starting with the famous black ensembles that Yves Saint Laurent created in the early stages of his carrier – among them his tuxedo for women that turned conventions in the fashion world upside down. Most of the displayed items, however, are clothes that demonstrate how life in the red city of Marrakesh inspired the designer. Gowns in yellow, red, blue, pink, fuchsia, orange, golden lamé blouses, harem pants, djeballas with golden braids, and so much more – all created subsequent to Yves Saint Laurent’s first stay in Marrakesh in 1966.

From that year on until his death in 2008, Marrakesh was Saint Laurent’s second home and refuge from the frantic world of fashion. In a “Paris Match” interview he declared: “I owe the audacity that has been mine ever since to the shamelessness of this country’s colorfulness and the fire of its creativity.” Those who knew him claim that he was nowhere more creative than in Marrakesh.

Therefore, German magazine “Der Spiegel” argues, Marrakesh’s new Yves Saint Laurent Museum is not just dedicated to the fashion designer’s work, but also to a certain extent to the country of Morocco and its Islamic art.

The building, located right next to Jardin Majorelle, in the street named after the late designer, cost 15 million Euros. Saint Laurent bought the garden with his longtime companion and business partner Pierre Bergé in 1980 and saved it from deterioration. The contrast between the green of more than 300 different species of plants and its famous royal blue has been popularized through countless photos and the garden attracts more than 800,000 visitors annually. 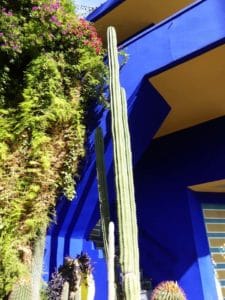 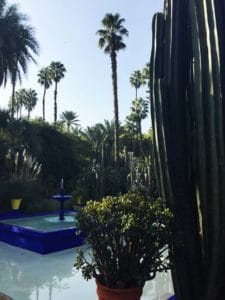 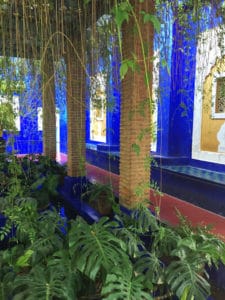 
In the introduction to the Museum’s guidebook Pierre Bergé stresses the significance of Morocco for Saint Laurent’s work and explains why it is therefore normal and logical to build such a museum in Marrakesh.

What may or may not be normal people must decide for themselves. We, however, share Yves Saint Laurent’s fascination for Morocco and Marrakesh and strongly recommend you visit these two very special and inspiring sights.

Morocco. Sunny, exotic and lively. The aroma of spices is in the air, the call of the muezzin can be heard through the bustling souks, the sun bathes the red city in an unforgettable light every morning and evening. There is this mystical and mysterious atmosphere that no longer forgets who has traveled to Morocco. Doesn’t that sound like a place of longing these days? We have good news: you can basically travel to Morocco….

THE THREAT OF THE MOROCCAN CRAFTSMANSHIP

Just recently we wrote a blog article about the impressive, traditional craftsmanship of the Berber women in Morocco. The Covid-19 pandemic threatens, next to many other things, this craftsmanship for which Morocco is known worldwide. A project tries to counteract…